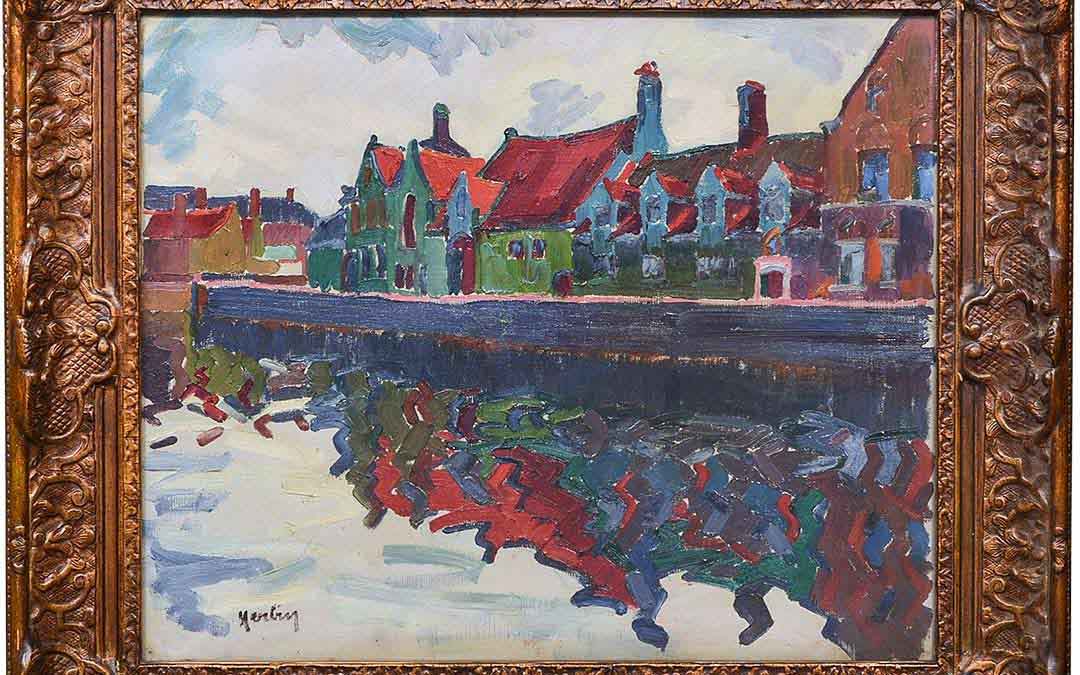 At the turn of the twentieth century, great artistic movements were beginning to evolve from the Impressionist styles of the late 19th century. For one group of artists, the retention of the rapidly, almost uncontrolled brush strokes of stark contrasting colours seen in post-Impressionist works were expanded upon, focusing on the interplay of light and reflections – this group were to become known as les Fauves, or the “Wild Beasts”, following criticism during the Salon d’Automne in 1905 . Fauvism was a style that was at its height during the first decade of the 20th century, the leaders of the movement being Henri Mattise and André Derain, but amongst others were two painters Auguste Herbin, and Charles Camoin. Paintings from these two later artists appear side-by-side on 28th March – Day Two of our Spring Fine Art auction, here in Market Harborough.

Auguste Herbin (1882-1960) had humble beginnings, leaving school at the age of 12 to support his mother, father and younger siblings. In the evenings he studied drawing, and acquired scholarship at the Ecole des Beaux-Arts in Lille in 1900, before moving to Paris where he joined the Fauves at their height. In 1906 he visited Bruges and executed a small number of works listed in the artist’s catalogue raisonne as compiled by Geneviève Claisse, with three works titled Quai de la Poterie, a Bruges; Le Canal, Bruges; and Maisons du Quai de la Poterie (catalogue number 74-76). It is from this exciting period of Herbin’s early career that we offer this fourth work, Maisons au Quai Vert, Bruges, in our auction on March 28th. The previously unrecorded work offered here displays clear similarities of the other three recorded works executed in Bruges, with dynamic brush strokes and the use of vivid and intense contrasting colours that were applied to the canvas directly from the tube. We believe this is the first time this work has been seen to market since 1923 when The Leicester Galleries, London, held an exhibition of Herbin’s work – a label here found verso – although we have not been able to confirm that this work featured in this exhibition. Herbin’s prominence as an artist was to come later in his career as a key figure in the development of Abstraction and Cubism which he first explored in 1917 and later went on to favour for the remainder of his illustrious career.

Charles Camoin (1879-1965) was another artist represented in the Salon d’Automne in 1905 alongside his close friends Mattise, Derain, and Maurice de Vlaminck, but unlike Herbin his style largely stayed true to his Fauvist foundations. The landscape of St Tropez offered here is believed to have been painted in the years following the Second World War when he is known to have made long visits to the South coast, sharing similarities in the application of a predominantly blue palette from this period of his career. This work again has been in private hands since it was acquired by a Mrs Blanco White from The Leicester Galleries, London, in early 1958, from their exhibition ‘Works by 19th and 20th Century Artists’, item no.84.

The two works together offer a fascinating and exciting addition to our March Fine Art & Antique auction, arriving from a local house clearance and presented for the first time to the international market here in Market Harborough. Previews for the auction open on Friday 24th March. Interest in the lots can be registered with will.gilding@gildings.co.uk, with private viewing available in the week prior to the auction by appointment.