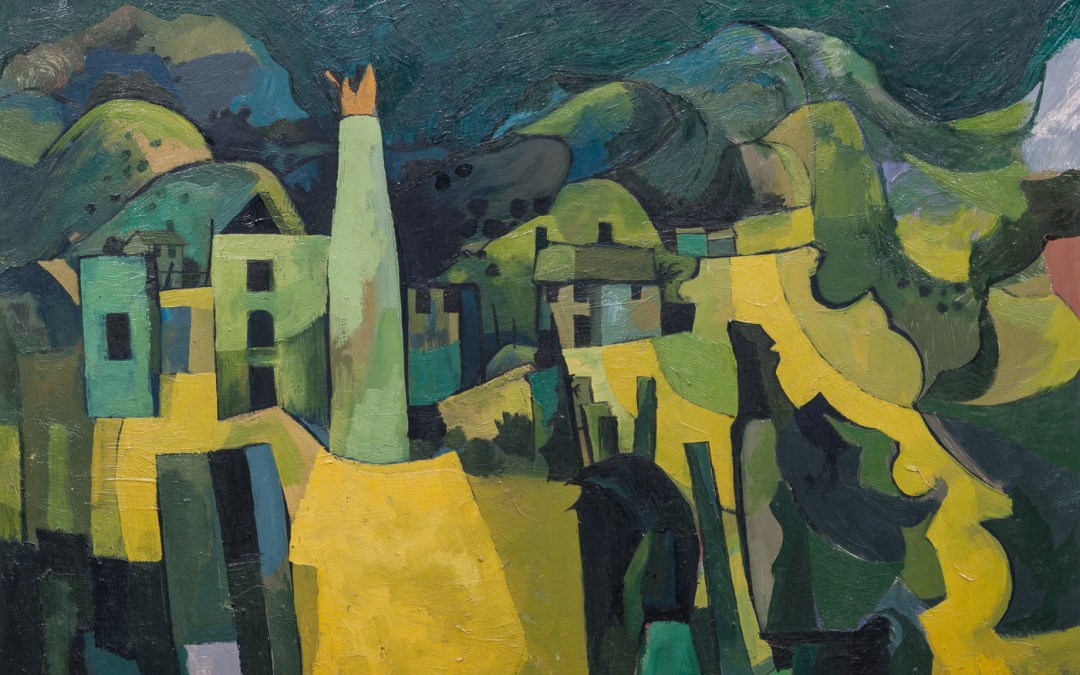 A prominent collection, primarily of Leicestershire based artists from the post-war era, drew great excitement today at auction in Gildings’ Market Harborough salerooms.

A broad range of artworks from oil paintings to abstract sculpture were offered in today’s Fine Art & Antiques auction, originating from a private collection of a late Leicestershire gentleman, who had lived on The Green, Anstey, for a number of decades. The 53 works, amassed over a lifetime of collecting, sold for a total in excess of £91,000. The collection featured a great many art works from some of Leicestershire’s most prominent artists of the mid to late 20th century, including names such as Robert King, Ken Ford, George Pickard, Rigby Graham and Bryan Organ. “In the years immediately after the Second World War, Leicester was not renowned as a cultural centre, “says Will Gilding, Director at Gildings Auctioneers, “but there was a highly creative vein of artists, most of whom were colleagues and friends through the then Leicester Polytechnic, but many were also exhibited through The Gadsby Gallery, Market Place, Leicester. Between them they depicted Leicester and the environs in often vivid detail – such as in the works by Rigby Graham – but also brought the abstract and modernist art movement that was buoyant throughout the UK during those years right to our doorstep. Many were commissioned for works in local schools or public spaces. It is rare to see a body of so many of our artists’ in one collection, and even rarer for them to be offered at auction in the county. The level of pre-sale interest was highly re-assuring and it showed in the results today. Bidding was fierce throughout,” reports Mr Gilding. Some choice highlights include a Cornish mining landscape by Rigby Graham making a hammer price of £2,100; a bronze sculpture by Ken Ford of The Three Graces making £1,600; an abstract sculpture by George Pickard making £800; and a Bryan Organ landscape making £800.

The Collection featured not only important local artists but also names acknowledged on the international art market for this period including Graham Sutherland and John Piper. Art by the leading names of the Post-War British art movement are in strong demand in the current market. The Collection from The Green, Anstey featured an original John Piper landscape executed in 1943 in the Welsh Manod Mountains. Titled “The High Fall” the work attracted a great amount of pre-sale interest from international dealers and private collectors from throughout the UK and also America. Estimated at £40,000 – £60,000, the gavel fell to the successful telephone bid for a final hammer price of £66,000, after a good battle between absentee and other telephone bids. “We’re delighted that this important work realised such a strong price for the Estate. It is a very powerful painting, beautifully executed, and has been cherished in this Leicestershire home for the last 30 or so years. We’re pleased it is going to a new home where no doubt it will be cherished for a further generation.”

The sale also featured a small collection of Leicestershire based jewellers – Tom Payne and Peter Triggs of Hinckley. Known for their abstract jewellery designs in the 1960s through1980s, four pieces offered here today, all striking an very individualistic, totalled £1,800 hammer.

Images of works available on request