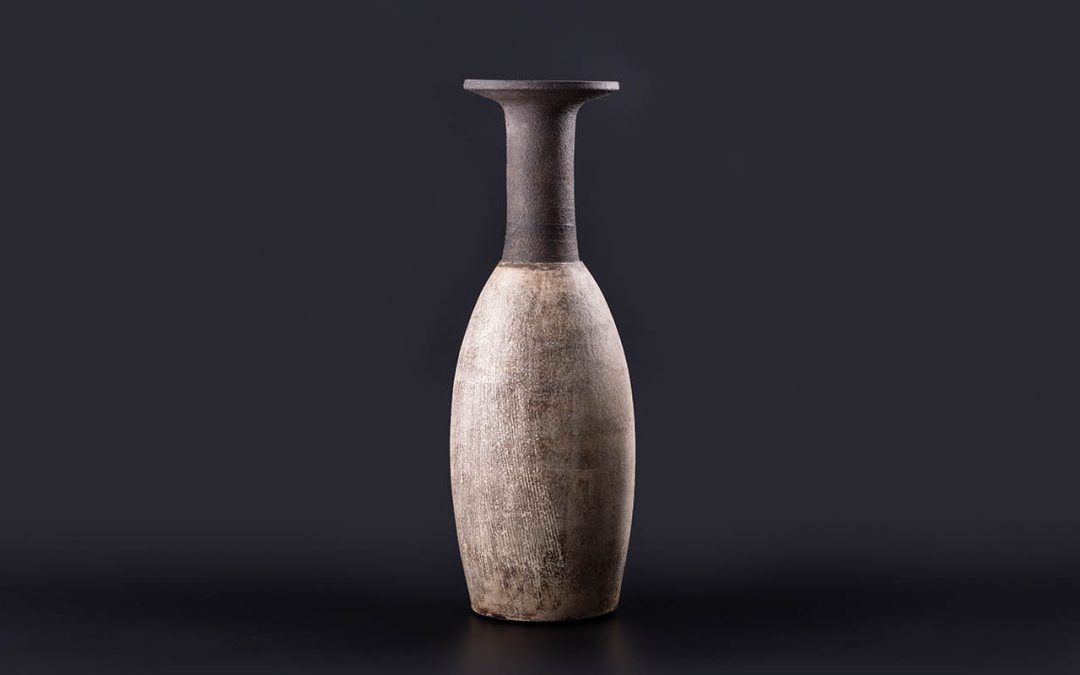 A tall 1950s ceramic vase by the esteemed studio potter Hans Coper realised an incredible £21,960 today at Gildings Auctioneers in Market Harborough, having been purchased from a car-boot sale by the owner back in the early 1990s for just £20.

We have all heard of the fabled tale: a Sunday morning car-boot, something is snapped up because it fits the bill, unbeknown to the buyer it turns out to be of substantial value some years later. That is exactly what unfolded and culminated today in Market Harborough, during Gildings’ 20th Century Decorative Arts auction. The star of this tale was a large ceramic stoneware vase, which to some may not look much more than the £20 originally paid for it, but to others it equated to a substantial piece of post-war British studio pottery by one of “The Greats”, the German-born Hans Coper.

Will Gilding, Director and specialist in 20th century Decorative Arts at Gildings Auctioneers, recounts how the latest chapter of this story unfolded. ‘We received an innocuous valuation enquiry through our website with two pictures attached and five words that really got my heart racing – “Hans Coper vase, 19 inches”. I picked up the phone straight away to speak to the owner, who was a lady living in Leicester city. She said quite casually that she had this vase on the floor of her lounge that she had bought in the early 1990s from a local car-boot sale. She said she bought it at the time because she needed something to put a tall floral arrangement in, which she duly did having parted with £20 cash for it. Having recently retired, she looked at the vase in a fresh light, noticed the potter’s signature mark on the base, and turned to Google. A quick search lead her to the name of Hans Coper, and from there her local auctioneers. Luckily for her, I spent 8 years specialising in this field in London, and I had great pleasure in confirming it was a genuine work, and she decided to consign it for auction’.

Hans Coper was a German émigré during World War II, fleeing Nazi persecution and taking refuge on these shores. Shortly after the War he went to work at a ceramic button factory which was run by another émigré and equally revered name – Lucie Rie. Under Rie’s guidance, Coper developed his creative talents with the potter’s wheel to become “the most important and respected potter of the 20th century”. His works are found in art galleries and institutions around the globe, and earlier this year one of his ‘Arrow head’ forms sold elsewhere at auction for a staggering £305,000.

‘Not only has the seller been fortunate here in being in the right place at the right time when she bought this vase, she has also come to sell it at the right time as well with demand for Coper’s work being right at the crest of a wave’, according to Mr Gilding. ‘This vase is unusual for Coper’s work by way of the scale and thickness of the rim, but never-the-less it bears many of his trademarks in the subtle textures and glazes.’ Offered with an attractive pre-sale estimate of £5,000 – £8,000, online and telephone bidding fought competitively to take the final price to £21,960, inclusive of charges. ‘My vendor is flabbergasted that a vase she has lived with for all these years on her floor, with children playing around it, and the vacuum cleaner bumping against it every week, has raised so much money. Because of her eagle eye all those years ago, her retirement is starting off just that little bit happier! One of the great Car-Boot Treasure tales to be retold for years to come I’m sure’.