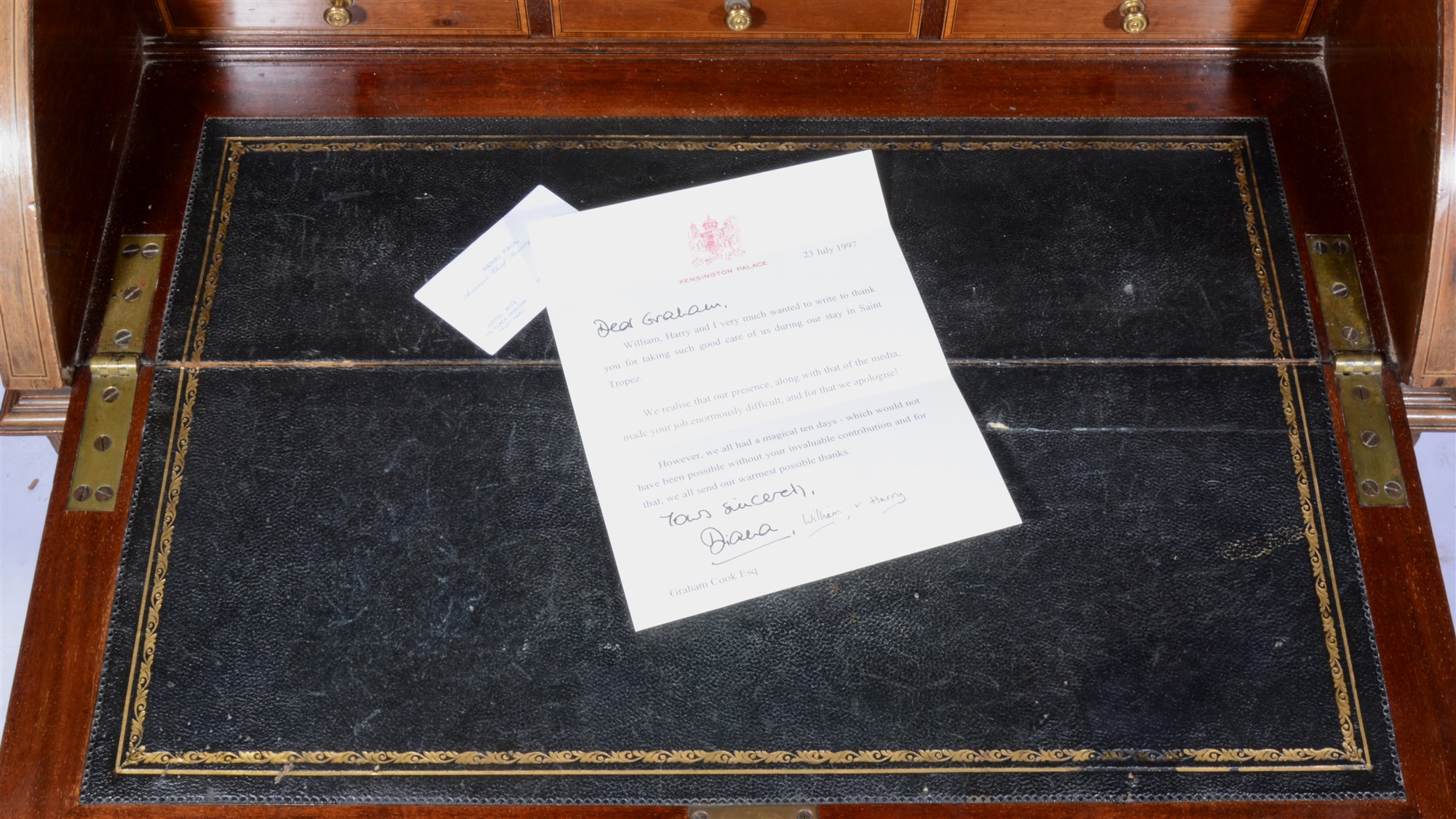 A rare piece of Royal history was offered today at auction at Gildings Auctioneers of Market Harborough, with a rare letter from the late Diana, Princess of Wales, to her bodyguard written just a month before her tragic death sold for £2,950. The thank you note on Kensington Palace headed note paper, addressed to Graham Cook Esq, was further signed by the young Princes William and Harry, making this very personal acknowledgement an even rarer piece of late 20th century history.

In the summer of 1997, Diana, Princess of Wales, was attracting media headlines around the world with her newly formed relationship with Dodi Fayed, son of the Egyptian-born business mogul Mohamed Al-Fayed. In July of that year, Diana accepted a personal invitation from Al-Fayed to stay at his family’s summer compound in St Tropez, Southern France, with her two sons. The Royal family members were to be looked after by the Al-Fayed’s personal protection team whilst there, headed up by Henri Paul, and including the letter’s recipient, Graham Cook. On return to Kensington Palace, on 23rd July, Diana dispatched a personal thank you to Cook for his services. A little over a month later, the World awoke to the tragic news of the death of Diana, Dodi Fayed, and Henri Paul, following a stay in Paris’ Hotel Ritz.

‘Given the course of history, the poignancy of this letter really strikes home,’ says Mark Gilding, Director of Gildings Auctioneers. ‘With Diana referring to the presence of the media during their stay in Saint Tropez making the security services job “enormously difficult”, it reminds us all of the immense spotlight she found herself under from the World’s media, and the pressures that her and those around her faced. It is an important reminder that at the heart of this message was a mother wishing no more to enjoy a summer vacation with her two sons. With the security teams help they “all had a magical ten days”, and tragically, as we now know, it was to be the last vacation shared between Diana and the Princes’. The letter attracted pre-sale interest from around the World, with bidding coming predominantly from live internet bidders, selling to a private UK- based collector. ‘Rare is the opportunity to obtain such a powerful piece of correspondence with a personal insight into one of the true icons of the 20th century. The result shows that Diana, commonly known as The People’s Princess, remains close to the hearts of many.’

William, Harry and I very much wanted to write to thank you for taking such good care of us during our stay in Saint Tropez.

We realise that our presence, along with that of the media, made your job enormously difficult, and for that we apologise!

However, we all had a magical ten days – which would not have been possible without your invaluable contribution and for that, we all send our warmest possible thanks.